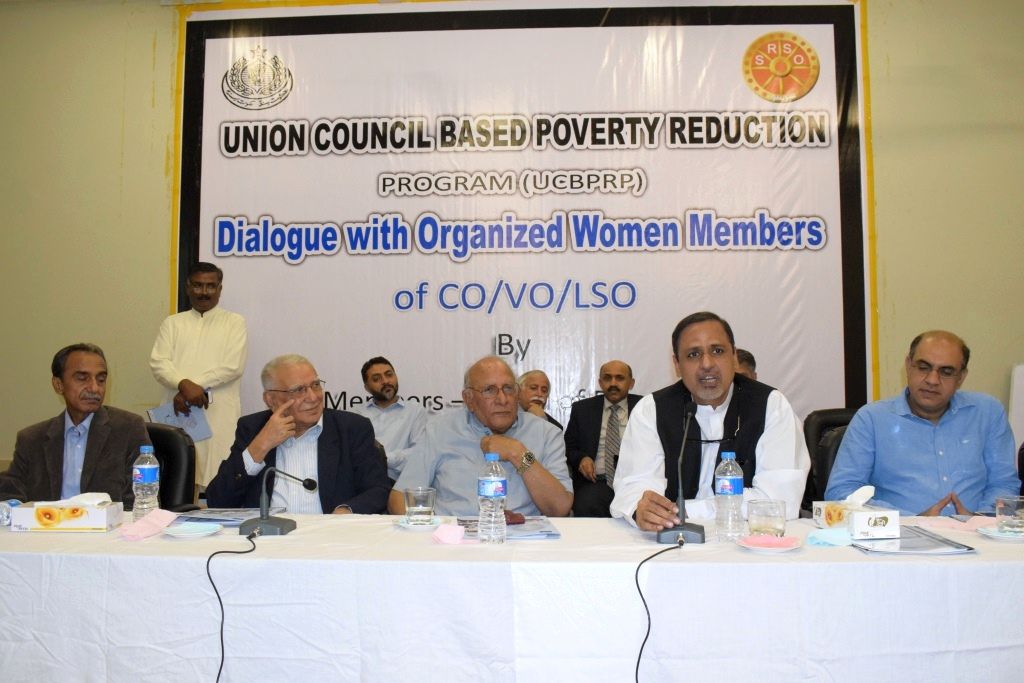 Prominent social development expert, Chairman, Sindh Rural Support Organization (SRSO), Shoaib Sultan Khan said that all poverty reduction measures adopted by the Government were being focused at economic and social empowerment of women especially for the rural areas have been fulfilled .
Addressing to a dialogue with organized women members of the Community Organizations (COs), Village Organizations (VOs) and Local Support Organizations (LSOs) under project of Union Council Based Poverty Reduction Program (UCBPRP) a project of Government of Sindh, organized by the SRSO at mein complex on Friday 17 Nov, 2017.
Additional Secretary Planning and Development Muhammad Ali Khoso, Additional Secretary Finance Athar Mirani, Commissioner Sukkur Dr Muhammad Usman Chachar, Ghulam Sarwar Khero, Former Federal Secretary Fazalullah Qureshi, Nazar Muhammad Memon, Dr Rashid Bajwa and other officials were present.
Mr. Shoaib said the UCBRPR worked only with women and empowered them not only economically but also on attaining self-confidence and power of their own potential to improve their status.
Commissioner Sukkur Muhammad Usman Chachar in his address highly appreciating the role of the SRSO and said that the organization on led by its Chief Executive Officer (CEO) Muhammad Dittal Kalhoro is fulfilling a obligation of working for poverty reduction from the region.
CEO-SRSO Muhammad Dittal Kalhoro said that Sindh government is fully committed to such programmes like UCBPRP and was intended to back it until end adding that the UCBPRP was initiated at the beginning of 2009 at Kashmore- Kanhkot, Shikarpur and Jacobabad districts.
A large number of women beneficiaries of UCBPRP and Success Program shared their experiences on the occasion. Earlier, shields and awards were distributed among the active women of the community organizations of different districts.

MoU Signing with ZABTech in Karachi

Contract signing ceremony held on September 27 2017 in Karachi, in which SRSO and ZABTech entered into an agreement to implement the Technical and Vocational Skills Training (TVST) component in Larkana and Kamber-Shahdadkot districts, under the European Union funded Sindh Union Council and Community Economic Strengthening Support (SUCCESS) programme. Under this component, 36,500 willing and eligible persons either organised members or their siblings will be trained. This would support the income generation activities through market linkages and placements, which will cause improved and abundant livelihood options. 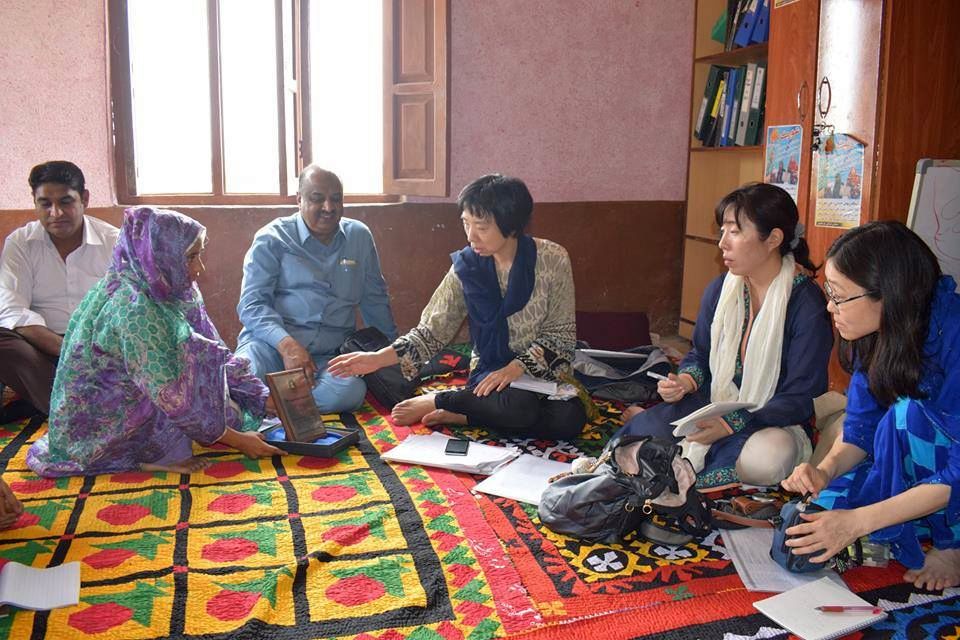 A delegation from Japan International Cooperation Agency (JICA) and Women Development Department (GoS) visited Sindh Rural Support organization and Union Council Bhirkan in Shikarpur district, on Thursday 20 July 2017.
SRSO management briefed the delegation about the establishment of the SRSO, its programs and developmental activities and initiatives taken by SRSO for the empowerment of rural women.
JICA is formulating a project for Pakistan Female Home Based Workers (FHBWs), and this visit was to learn about the work of the SRSO.
The JICA delegation visited the LSO Mehran in Union Council Bhirkan of district Shikarpur and met with members of Business Development Groups(BDGs) Moorani, Birkhan and Khai, where President of LSO Mehran briefed the delegation and explained the nature of activities and initiatives carried out by the LSO. BDGs members presented their Crafts and shared activities and other related information about the hand made products they have made and showcased in exhibitions.
The JICA delegation showed keen interest in knowing the nature of work and the products of home based workers of rural Sindh with a view to work with them. Discussion also revolved around marketability and mobility of Female Home Based Workers and also for facilitating their linkages with potential buyers came under discussion.
The JICA delegation also visited the "Sartyoon Sang Crafts Enterprise" (sales outlet) situated in the SRSO Complex premises. The Sartyoon Sang is a social enterprise of SRSO(established in 2011) and works towards the core objective of connecting rural artisans especially women to market.

A Consultation Workshop regarding the Role of Community in Poverty Reduction and Way Forward: 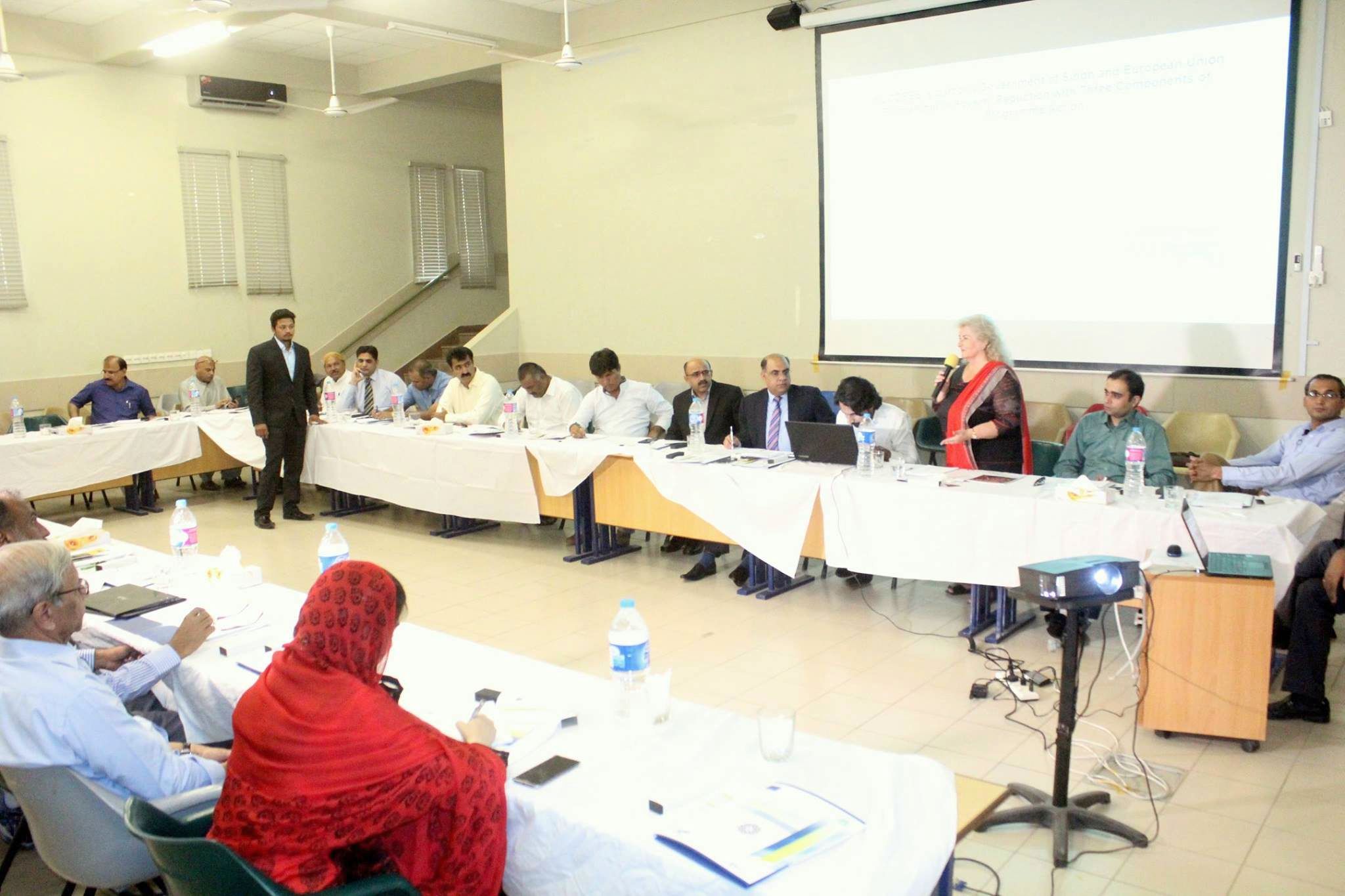 A consultation workshop on the role of community in poverty reduction was held under the Sindh Union Council and Community Economic Strengthening Support (SUCCESS) programme at the Conference Hall of SRSO Complex, Sukkur on 4 July 2017. The workshop was organised as the part of SUCCESS Programme EY’s component, funded by the European Union.
Presiding over the consultation workshop, the team leader of SUCCESS, Kathryn Ennis-Carter, said that after the successful achievements of the Sindh government’s SUCCESS programme, the European Union has also decided now to support this programme in future. She further added that a policy framework for the next six months in 16 districts of Sindh province, in consultation with the community and the government departments, will be constituted and handed over to the Sindh government. She said that poverty reduction could be brought with the mutual coordination of community, NGOs and the government departments. On this occasion, Consultant to European Union’s Technical Assistance for SUCCESS Dr Qaiser Bengali highlighted the importance of micro and macro linkages in the development of the overall poverty reduction strategy and community driven local development policy framework.

Sartyoon Sang Crafts Exhibition was organized by SRSO from 5 to 7 May , 2017 at the Dolmen Mall Clifton Karachi, displaying work of around 2,000 women artisans, from the northern districts of Sindh . The event was inaugurated by Ms. Erum Khalid (Special Assistant to Chief Minister Sindh for Women Development). She lauded the efforts of the SRSO for arranging the event and expressed hope that the event could be further helpful for development of links and easy market access for the artisans of skilled products.
Sartyoon Sang Craft Exhibition was being organised by SRSO for the fourth consecutive year with the motive to support ethical fashion of the Sindh and to promote crafts of some of the most marginalized women in the province.
Scores of people visited the exhibition and appreciated the work of skilled women entrepreneurs.

A Dialogue with Organized Communities by GoS Officials 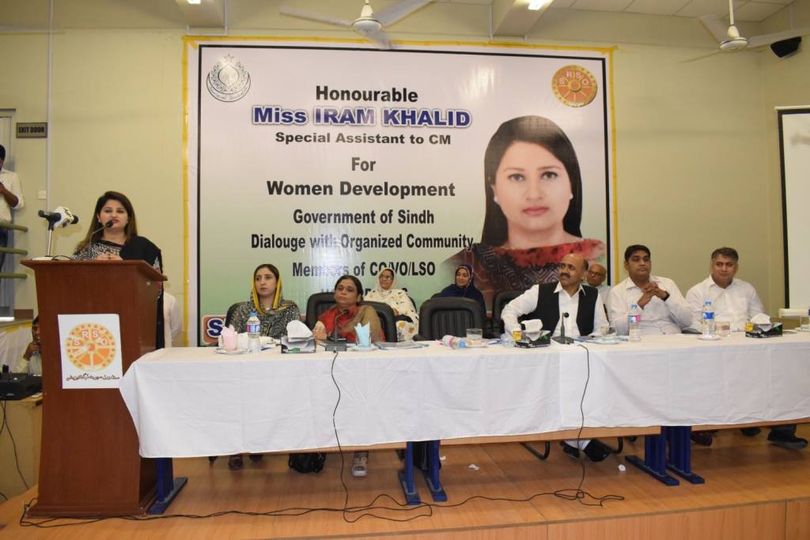 The Sindh Rural Support Organization arranged an interactive dialogue of community leaders and community resource persons (CRPs) from rural Sindh, at the SRSO – Complex, Sukkur, on April 18, 2017. Ms. Iram Khalid, Special Assistant to Chief Minister Sindh for Women Development Department (Govt. of Sindh), was the Chief Guest.
Organized Female Community Members, who are the beneficiaries of the Interest Free Loan (funded by Women Development Department, Govt. of Sindh) from Sukkur, Khairpur and Naushero Feroz; beneficiaries of Community Investment Fund (Interest Free Loan being managed by the Community) under the Union Council Based Poverty Reduction Program (UCBPRP funded by the Govt. of Sindh) from Shikarpur, Kashmore-Kandhkot & Jacobabad, and Community Members of the Sindh Union Council and Community Economic Strengthening Support (SUCCESS) Programme from Larkana and Qamber-Shahdadkot funded by the European Union (EU) participated. The beneficiaries shared their struggling stories narrating right from the beginning up to the achievement they have made, which have empowered them both socially and economically.
While addressing the community member, Ms. Iram Khalid (the Chief Guest) said that the stories of these women have impressed much beyond her expectations. She narrated that these women are the leaders in themselves and have proved their courage and determinations through the work they have done, as a nation can only progress, if both of its men and women work all together. She expected that the community women would share their problems, issues, etc. but she only heard their achievements and successes, and proved them as good leaders. She expressed that the education is also necessary in order to move ahead in this cause. She also applauded the marvelous efforts of SRSO in transforming these communities, and the Sindh Government will continue to work for these communities in coordination with SRSO.
In the end, Ms. Iram Khalid thanked the community participants and the SRSO for organizing such an inspiring event. 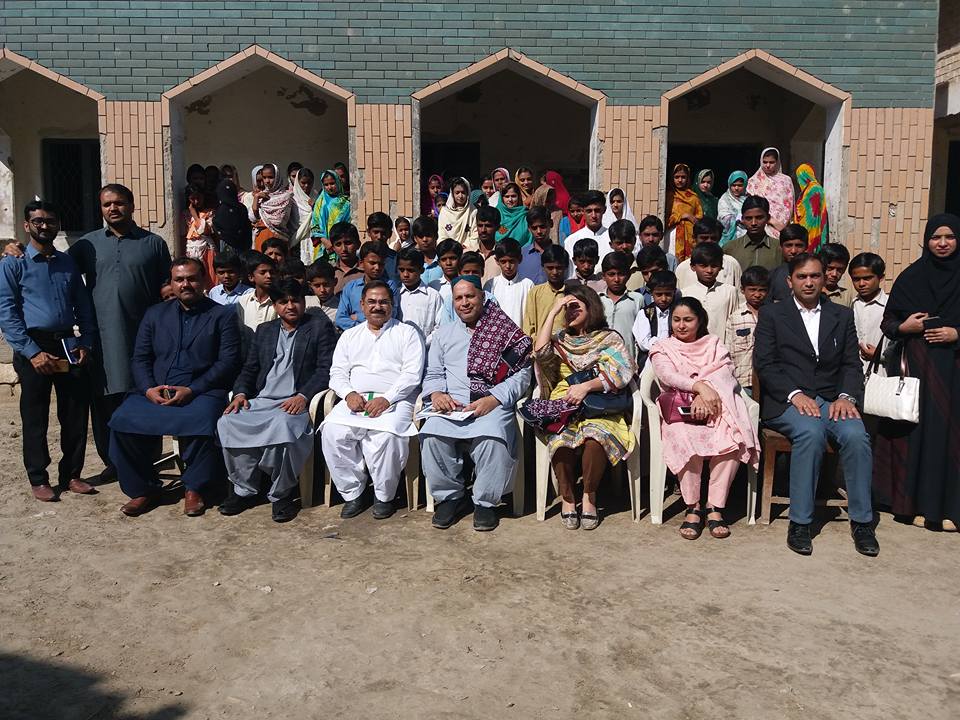 On February 23, 2016 Mr. Fawad Shamsi the Chief of Party, Sindh reading program visited three Non-Formal Education Centers established by the Sindh Rural Support Organization in the Jacobabad, district. The CoP appreciated the SRSO for their efforts to raise awareness for strengthening non-formal education in rural Sindh. Mr. Fawad expressed his pleasure at seeing children learning hard using educational materials supported by the Sindh Reading Program , funded by the USAID.
Sindh Rural Support Organization has established 67 Non-Formal Education Centers in Jacobabad and Kashmore-Kandhkot , districts under the Sindh Reading Program funded by the USAID. The main objectives of opening the NFE-centers is to educate the out of School children, who were deprived to enrolled in the normal education system. SRSO is engaged in developing curricula for non-formal basic education and adult literacy, establishing the system of teacher training as well as assessment methods and tools. Through this project, SRSO has enrolled 2,000 Children in NFE centers and have been provided educational opportunities.

The visit of AKRSP Team in Rural Sindh 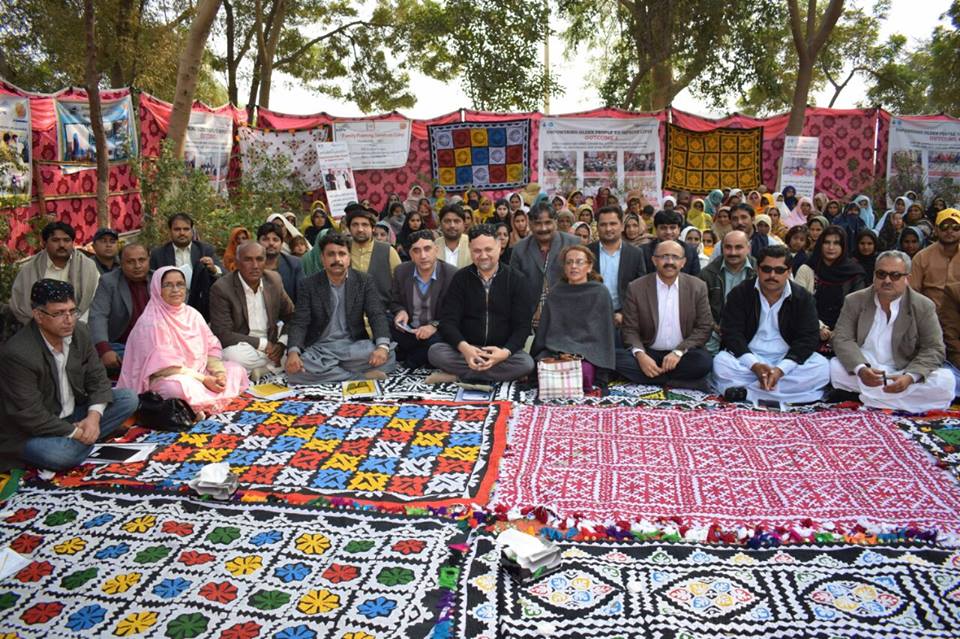 The Aga Khan Rural Support Programme team visited rural areas of Jacobabad and Shikarpur, districts and interacted with community institutions fostered under the Union Council Based Poverty Reduction Programme. UCBPRP is supported by Government of Sindh and implementing by the Sindh Rural Support Organization in three districts of Sindh i.e; Shikarpur, Kashmore-Kandhkot and Jacobabad. This visit was organized on January 19, 2017.
SRSO arranged a meeting of Local Support Organisations where other stockholders were also invited like District administration , representatives of government departments like police, health, Social Welfare department ,Livestock Department and Elected representatives of local Government .Civil Society Representatives like Save the Children and Marie Stopes were also present.
It includes discussions with government officials, donor community, civil society representatives, and the Community Leaders. AKRSP team was pleased to see political, administrative and social pillars working for poverty reduction in rural sindh. They pay tribute to the Community Leaders in trying to improve lives with limited resources.
Members of the AKRSP delegation visited different vital and life-saving projects implementing by SRSO in Jacobabad like Vaccination and Family Planning Program. Team also visited a Non-formal Education Center and a camp of Equine Animal welfare in the taluka Thull.
The series of meetings and visits to projects provided the AKRSP team with an excellent overview of the SRSO and allowed members a clear insight into the challenges faced by SRSO staff while ensuring a community-driven, results-orientated and partnership-focused approach to rural development.

From January 06 to 08 2017 at the Ocean Mall Karachi, Sindh Rural Support Organisation (SRSO) hosted a three-days crafts festival. The event was displaying work of around 1,200 women artisans, of northern districts of Sindh.
Sartyoon Sang Craft Exhibition was being organised by SRSO for the fourth consecutive year with the motive to support indiginous fashion of the Sindh and to promote crafts of some of the most marginalized women in the province.
Scores of people visited the exhibition and appreciated the work of skilled women entrepreneurs.