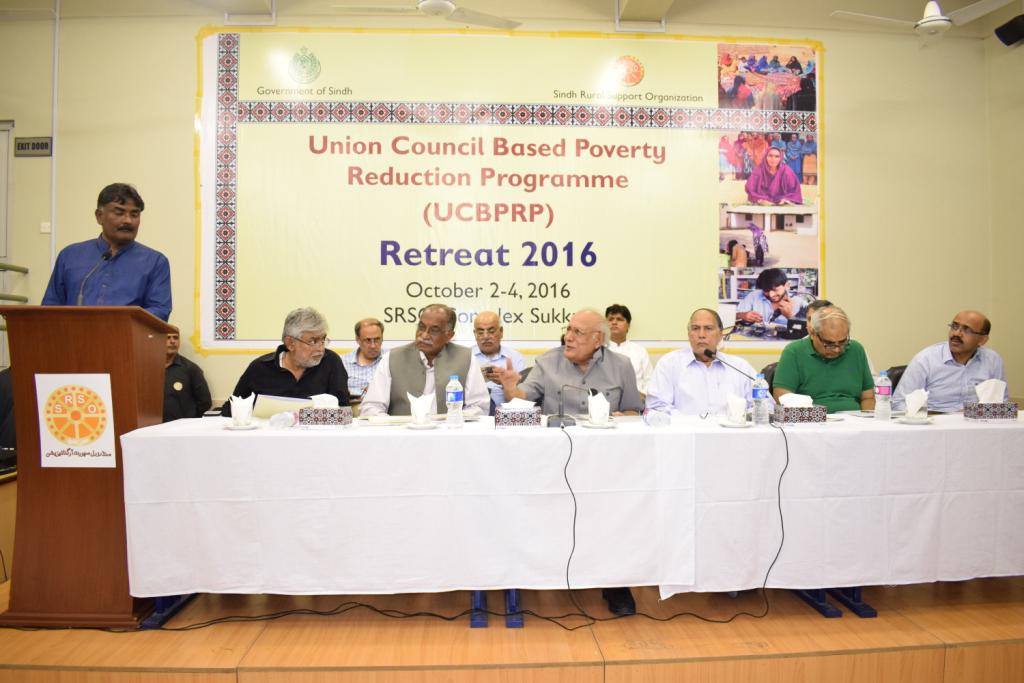 Sindh Rural Support Organization(SRSO) organized the retreat of “Union Council Based Poverty Reduction Program (UCBPRP)” from 2 – 4 October 2016, at SRSO Complex, Sukkur .
The objective was to develop a future strategy and to strategize institutional strengthening and sustainability, through collaboration by defining role of the Community, Government and SRSO. Different stakeholders, government officials, RSPs experienced professionals, community representatives and program staff attended this event.
The Union Council Based Poverty Reduction Programme (UCBPRP) was funded by Planning & Development Department (Govt. of Sindh), aimed at reducing poverty in rural areas of Sindh, was launched in February 2009, in district Shikarpur and Kashmore-Kandhkot. After analyzing the performance in both the districts, Government of Sindh subsequently expanded this program in Jacobabad district as well in Mar 2010.
The UCBPRP is creating an impact in transforming the social mobilization process into a more effective tool for empowering people and distinguishing the community organizations, as effective sources for poverty reduction and delivery of services. These institutions / organizations had not only empowered the most neglected segments of the society, but also made positive impacts on the social fabric of the society. Nonetheless, in their effort to contribute towards the social well-being of their areas, women venturing into the development sector are contributing to the social cause by adhering to the social norms and values of their areas. The trust in these poor women social workers was evident from the support they are getting from SRSO.
To expand the impact of social mobilization, this program focused on;

Prominent development policy makers and practitioners who attended the event stressed on strengthening and sustainability of people's organisations to complement government’s political and administrative pillars by defining role of the Community, Government and SRSO.
The event concluded on 04 October with the commitment to continue strengthening of institutions of the people. 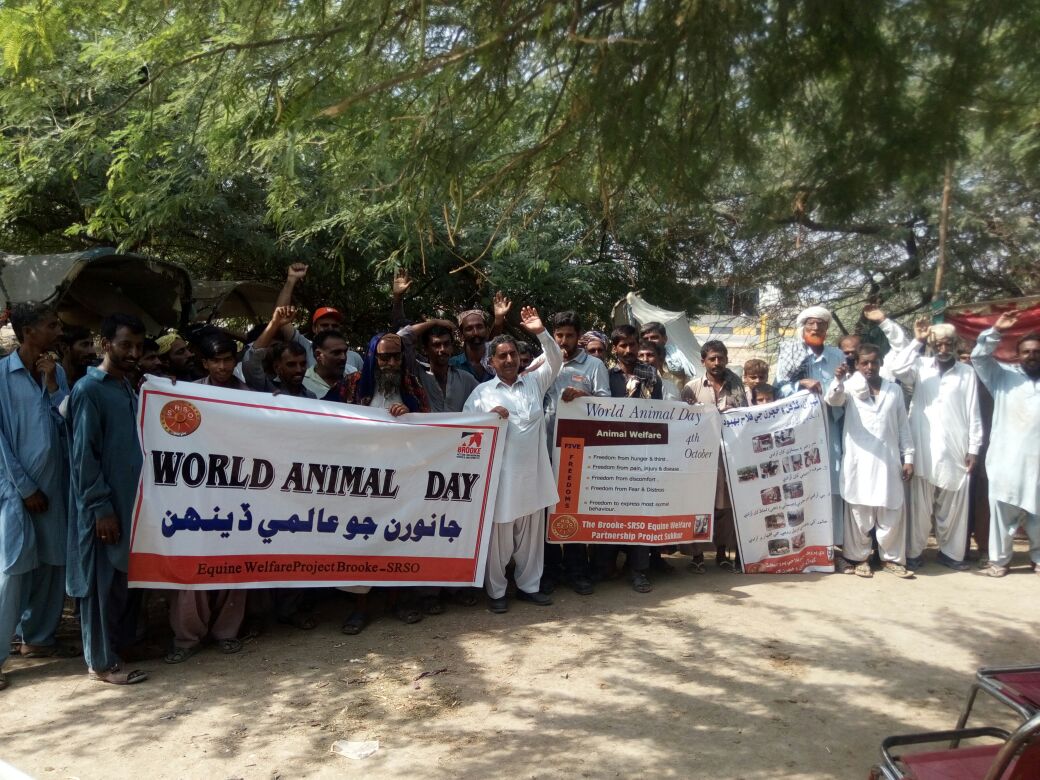 On 04 October 2016, Sindh Rural Support Organization commemorated "World Animal Day" under the theme, "Animal welfare should be the concern of everyone", in Sukkur, Larkana and Jacobabad by team of "Equine Welfare Project" (partnership of SRSO and The Brooke).
The commemoration was aimed at promoting awareness creation to improve the lives and livelihood of both animals and the people. Animals too play crucial roles in the socioeconomic development of any country.
Awareness sessions were conducted in camps for the welfare and five freedoms of animals. Speaking on the occasion, coordinator of the Brook Project said taking care of the welfare of Equine animals is equally important as these animals are very important in communities, particularly farming communities. He said , Caring for animals will greatly improve production and productivity.The Brooke-SRSO distributed Feed bags and awareness materiel in equine owners.
Trained LSPs, Equine owners and community members participated in awareness walks, arranged in Sukkur , Larkana and Jacobabad, districts. 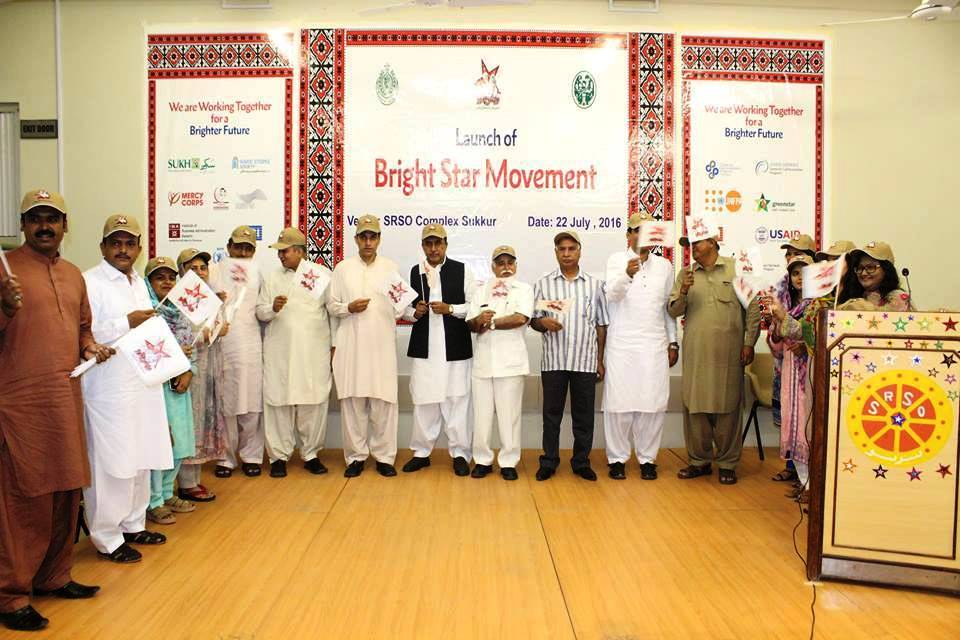 Roshan Taaro [Bright Star Movement] has launched in Sindh — a movement aimed at recognising work done in the field of health, Under the USAID funded John Hopkins University's Maternal and Child Healthcare Program of Health Communication Component, implemented by Rural Support Programme Network (RSPN) and Sindh Rural Support Organization (SRSO) in Shikarpur, Larkana, Jacobabad, Sanghar, Nosheroferoz, Sukkur, and Ghotki districts .
Bright Star movement aims to recognise and honour all those individuals, groups and organisations that are contributing towards the cause of mother and child health in Sindh that will contribute positively to the socio-economic uplift of Communities.
Bright Star Community Mobilization Strategy will guide the implementation of Bright Star interventions at the community level. 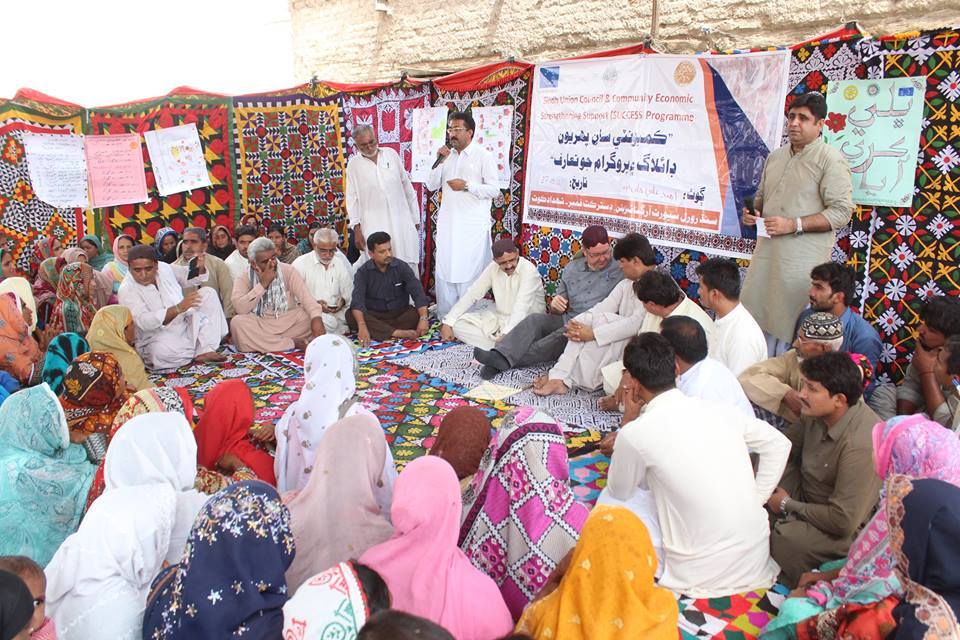 The First Secretary, Development Advisor for Rural Development and Nutrition, EU Delegation to Pakistan, Mr. Georges Dehoux, visited Jacobabad and Shikarpur districts on 26th May 2016.
He interacted with the women members of LSO Shaheen in Jacobabad District and VO Baijlo in Shikarpur district. The members of CIs gave detailed presentations describing the initiatives undertaken, and the progress and achievements made so far by these community institutions on self-help basis under the UCBPRP.
Mr. Georges visited the kitchen gardening and tree plantations projects by VO Baijlo in their village. He admired the role of rural women and thanked them for their active participation.
Mr. Georges Dehoux, visited village Umeed Ali Junejo in District Kamber-Shahdadkot on 27 and village Zakrio Mahessar in District Larkana on 28 May. At both the locations he participated in Programme Introduction (PI) dialogues conducted under the SRSO component. of the EU funded SUCCESS Programme.
During the PI dialogues, Mr. Georges interacted with the rural women and said that he has come here to see them, and that he will visit again after four years to see the change achieved.
Followed by the PI events, Mr. Georges Dehoux also observed the ongoing activity of Poverty Score Card (PSC) data collection in District Larkana. He observed the process of data collection and asked few basic questions pertaining to the methods of data collection, and the purpose of marking at household level.
CEO SRSO and his team were also present during the visits. 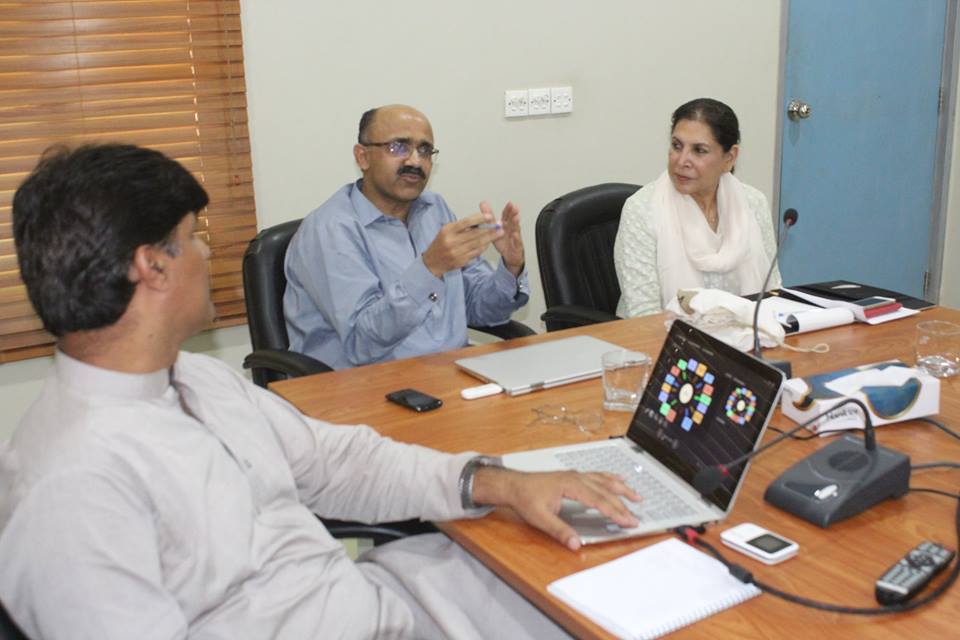 Indus Heritage Trust (IHT) and SRSO has signed a Memorandum of Understanding(MoU) for promoting Entrepreneurship and Support in establishing Common facility Center (CFCs) in rural areas of Sindh. on the occasion Chairperson of Indus Heritage Trust (IHT) Ms. Siddiqa Malik and Chief Executive Officer of SRSO Mr. MD Kalhoro was present with their team Members.
The main objective is to provide sustainable solution to female artisans for enterprise development. This collaboration will enable women artisans of rural areas to establish CFS ,a platform will provided for scaling up their production capacity and will strengthen market linkages in country as well as abroad. These CFCs will equipped with necessary infrastructure and will serve as one stop facilitating contacts for artisans to display their products , for business development services and provide linkages with input suppliers and nation wide retail chain stores and designers. 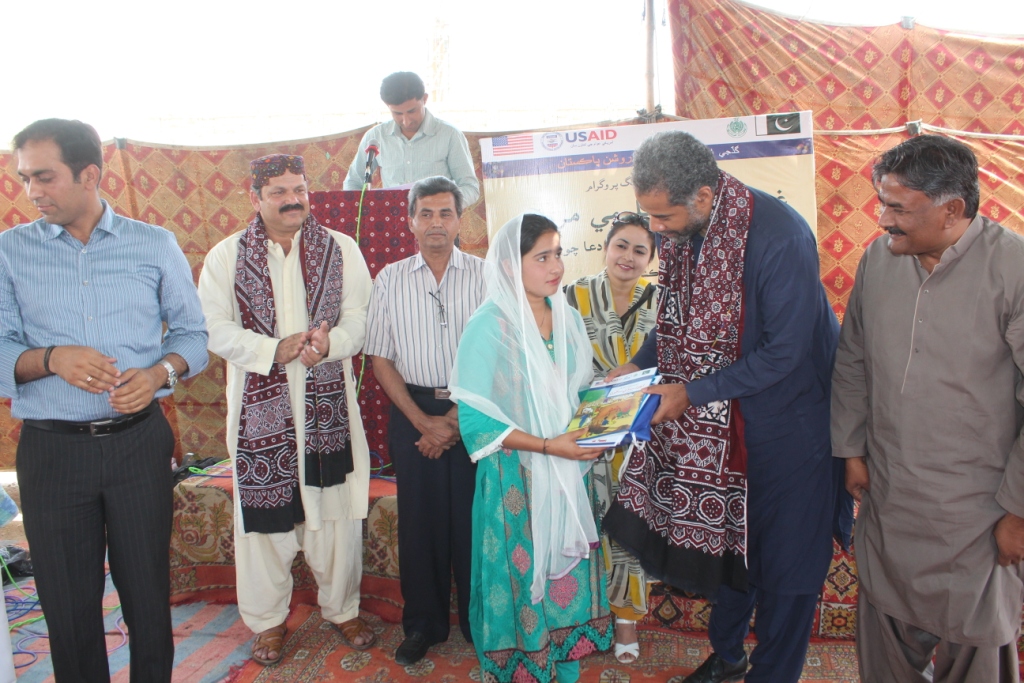 SRSO is implementing a Project of establishing Non Formal Education centers in a Partnership with the Sindh Reading program funded by the USAID. The project aims to enroll & educate out-of-school children ages of 10-15 years in Non Formal Education centers. A total of 67 Non Formal Education centers established in Kashmore and Jacobabad) and 2,000 out-of-school children will be enrolled. JICA has developed the curriculum and assessment tools for NFE Centers.
Under this project Chief of Party(CoP) of NFE program Mr. Christopher visited NFE Centeres Established by SRSO in Jacobabad on 8 April and Kashmore -Kadhkot on 9 April 2016 and distributed NFE learners Kit among Students. He was accompanied by Ms. Moona Communication Head, M.Alam Thai Director (Non formal education), A. Ghaffar Shah (DDO) and Miss Attia Tabasum SRP Advisor (NFE) and SRSO management.
Mr. Christopher taught phonic sound and Ms. Attia delivered a lecture and also told a story and mingled with children. 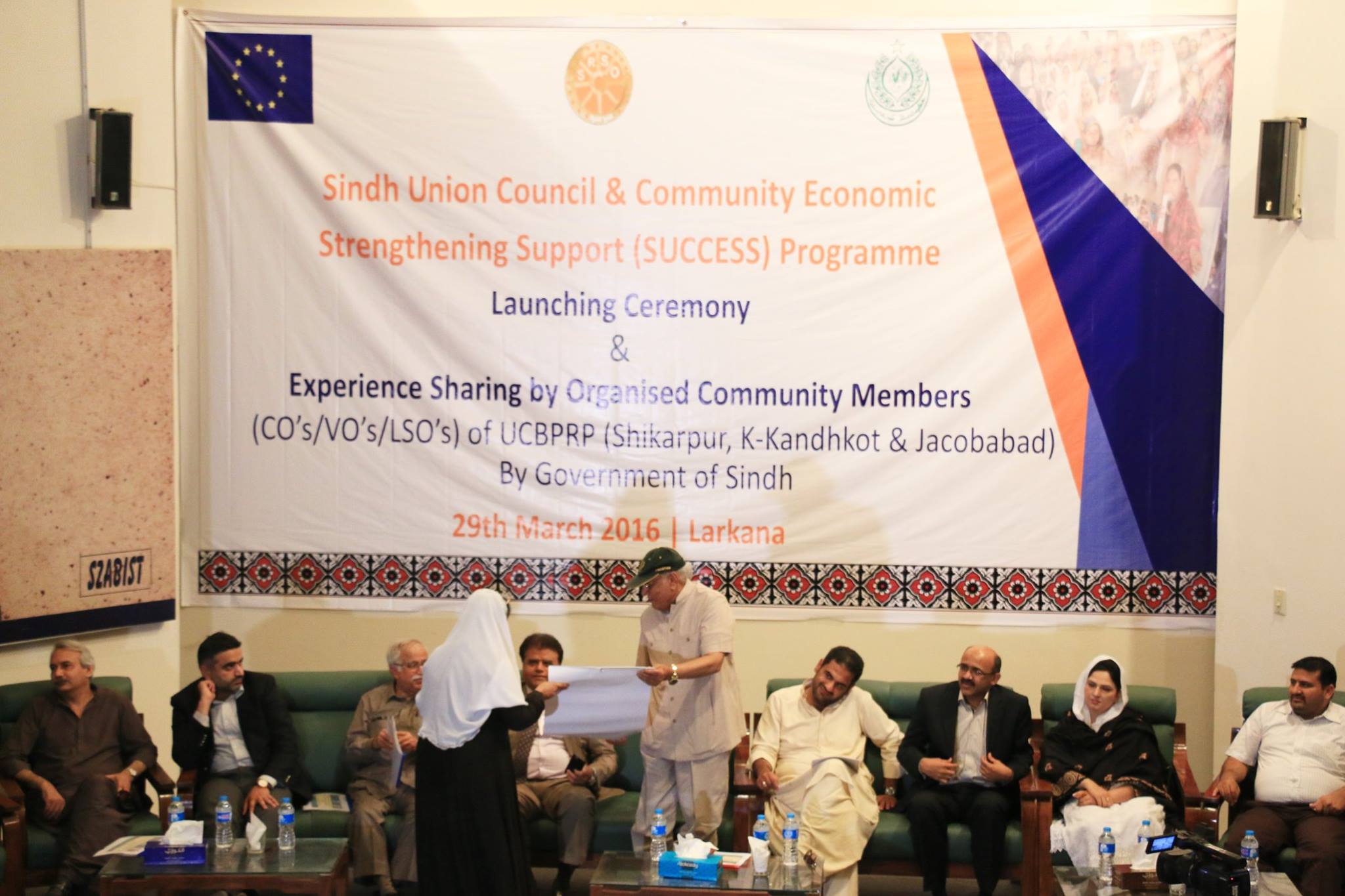 European Union funded 6-years Sindh Union Council and Community Economic Strengthening Support (SUCCESS) Programme launched in Larkana and Kambar-Shahdadkot districts of Sindh Province, in this connection a launching cermony and a community dialogue held at Shaheed Zuilfqar Ali Bhutto Intitute of Science and Technology (SZBIST) Larkana on 29 march 2016. The program is launched by the European Union (EU) delegation to Pakistan and the Government of Sindh. The objective of the SUCCESS programme is to reduce poverty through undertaking Community Driven Development (CDD) based on the proven social mobilisation approach of Rural Support Programmes (RSPs).
Commissioner Larkana, Mr. Ghulam Akbar Laghari, Chairman RSPN/SRSO Mr. Shoaib Sultan Khan, members of SRSO board of Directors, Deputy Commissioner Larkana Mr. Javed Jagirani, Assistant Commissioner Shikarpur Mr. Naeem Ahmed, PPP MPA Muhammad Ali Bhutto, officials of district administration, lawyers, educationists, Journalists, representatives of various NGOs, political leaders. notables of the areas and hundreds of Women of the Local Support Organizations (LSOs), EU officials, representatives of partner organisations for SUCCESS programme, government officials and civil society representatives attended the launching ceremony.
Women community leaders from Shikarpur, Kashmore-Kandhkot and Jacobabad shared their inspirational personal stories of successfully overcoming poverty by becoming socially organized as part of the Union Council Based Poverty Reduction Programme (UCBPRP) a join initiative of the Sindh government and SRSO, launched in 2009.
Their stories were full of conviction, struggle, passion, hope and a desire to change the economic condition of their households. The audience loved the energetic and lively talks by the four female community members.
Mr. Shoaib Sultan Khan, in his insightful speech, shed light on the history of the UCBPRP initiative. He appreciated the government of Sindh and the European Union for constantly supporting the rural development programmes. He said that the RSPs are effective in reducing poverty because, unlike other organisations, they have roots in the households and, thus, can easily access each household in the programme areas. Mr. Chairman said that the UCBRPR worked only with women and empowered them not only economically but also on attaining self-confidence and power of their own potential to improve their status. He said that SUCCESS programme was developed by the EU at the request of the government of Sindh (GoS) to extend the geographic coverage of their Union Council Based Poverty Reduction Programme. He said that the Sindh government is planning to cover the remaining districts of the province according to union council based strategy through provincial funding under its annual development fund.
The session was also addressed by MPA Mr. Muhammad Ali Bhutto and some other political and social leaders. 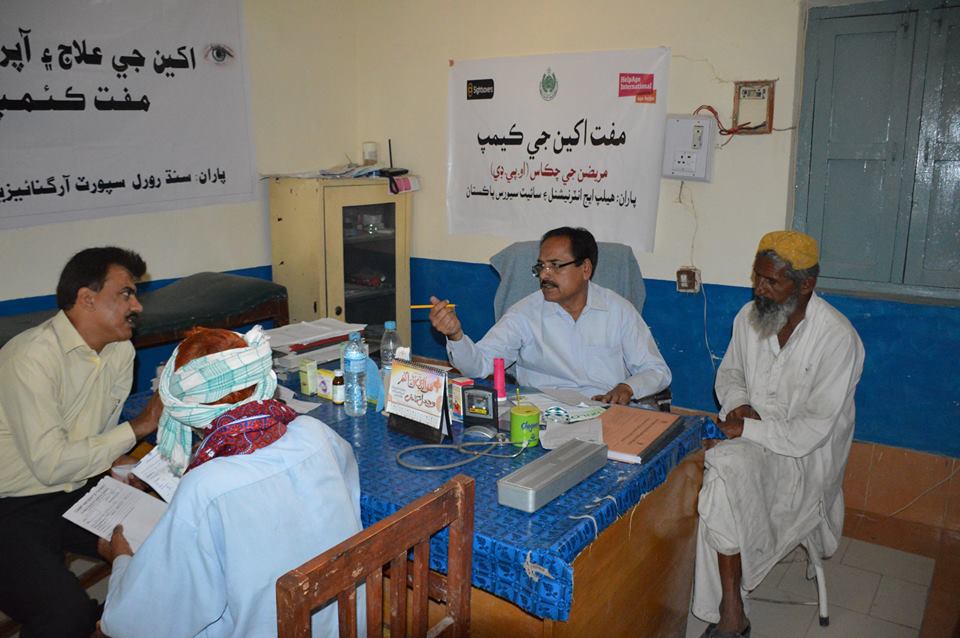 HelpAge decided to support older people and their families in the most impoverished areas in Shikarpur. Five free Eye Camps were organized in Basic Health unit and Rural Health Centers of District Shikarpur by Sindh Rural Support Organisation in collaboration with HelpAge International, Sightsavers and Al Shifa Eye Trust Hospital Sukkur.
Older people and their families received free medical consultations , 1012 patients have been diagnosed, treated and provided with free medication and spectaclesand and 161 patients were selected for cataract surgery at Al-Shifa Eye Trust Sukkur. Patients who were diagnosed of cataract were transported to Sukkur by a special bus, provided by Al Shifa Eye Trust Hospital and Operated upon free of cost by qualified surgeons.
There will also be follow up treatment for all the patients who received eye surgery for at least two months. This is to monitor the success of the intervention by ensuring that all patients with eye operations have no complications 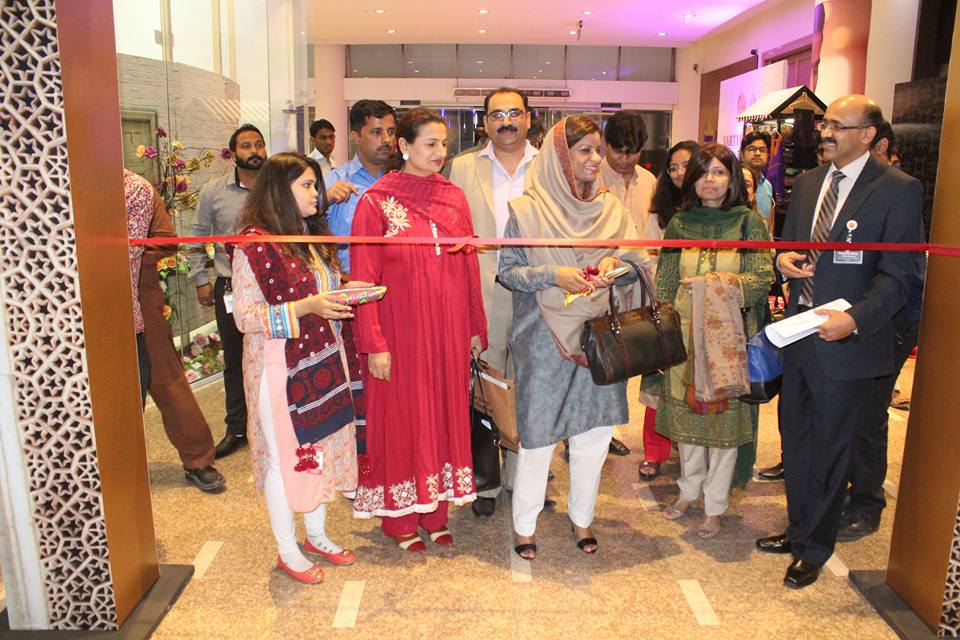 Sindh Rural Support Organisation (SRSO) hosted a three-day crafts festival displaying work of around 1,200 women artisans, from the northern districts of Sindh, February 5 to 7 2016 at the Ocean Mall Karachi. The event was inaugurated by MNA- Dr. Nafeesa Shah. She lauded the efforts of the SRSO for arranging the event and expressed hope that the event could be further helpful for development of links and easy market access for the artisans of skilled products. Scores of people visited the exhibition and appreciated the work of skilled women entrepreneurs and the endeavours of SRSO for poor and destitute community and expected in future to keep such spirit for rural communities of the province.
artyoon Sang Craft Festival was being organised by SRSO for the third year in consecutive with the motive to support indiginous fashion of Sindh and to promote crafts of some of the most marginalised women in the province.
Sindh Rural Support Organization has trained over 7,000 rural women in improved crafts making and developed a production line through its outlet “Sartyoon Sang Crafts Enterprise” in Sukkur. Sartyoon Sang is a social enterprise and works towards the core objective of connecting artisans especially women to market.
These series of “Sartyoon Sang” Crafts Exhibitions have gone so successful and attracted a large number of visitors and buyers / shoppers of the city. These were only made possible with the generous support of SRSO’s partners, donors and different stake-holders. These events were aimed to boost the local crafts and begin a sturdy process for connecting our Business Development Groups (BDGs) and artisans to high end market of Karachi.