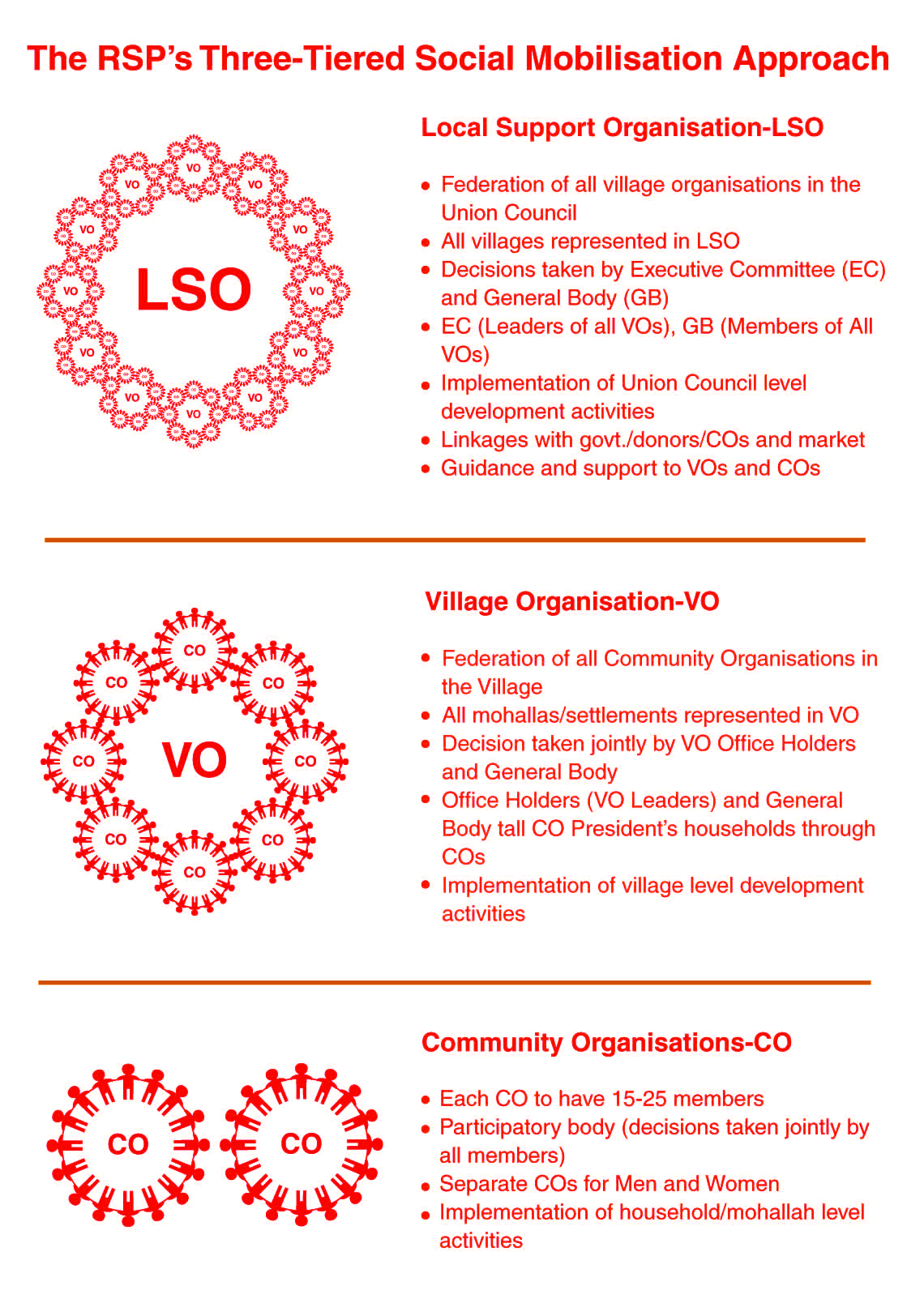 Key role of a Rural Support Programme is to mobilize, organize and motivate the community to take part in the development activity. Social Mobilization, thus, is the foundation of all activities. SRSO believes that success and sustainability of the Programme depends entirely on quality of social mobilization. This entails creating a proactive community sensitized to its problems and capable of addressing them. To meet such objective, community organizations(CO) are formed .CO is a group of 15-25 members and is an important forum for capitalizing the people’s potential to take an active role in the management of development activities. COs ordinarily carry out activities such as household level development planning, training, savings, microcredit and micro-investment. CO members meet on a fortnightly or monthly basis to discuss their plans and problems, thereby enhancing existing social capital and becoming more development oriented. A mobilized community is one that is able to identify its needs and find the resources necessary to meet those needs. Those resources may be their own savings or labor, or funds or information from a line Department. CO members are trained to exploit their potential to take up physical development, managed their resources and accumulate their capital.

Social Mobilization is a long and demanding process requiring guidance, supervision and monitoring of Social Mobilizers. SRSO is sensitive and alive to such vulnerabilities. Therefore SRSO has decentralized the strategy and introduced three tier social mobilization systems:

The concept of second generation social mobilization culminating into formation of Village Organization (VO) has been introduced in the social mobilization approach and strategy. This is an umbrella organization having more than one COs in its fold and membership of the VO normally consists of two nominated members from each CO in the village.. Its objective is:

Village Organization (VO) are further federated at union council level to form Local Support Organization (LSO). Federating COs into VOs and LSOs provides rural communities with the opportunity o mobilise their villages as well as entire union council . The LSOs in particular, with their union council level structure, not only aggregate the collective requirements of its member villages but also form linkages with those external organizations and government line departments which best serve the developmental requirements of its communities. The power of social mobilisation therefore provides poor communities with a unified vision and voice for availing resources and services which were previously inaccessible to them.

The poverty score based on the Poverty Score Card survey exercise is the criteria for mobilization of extreme poor into the fold of CO membership. SRSO has adopted the Poverty Scorecard developed by Dr. Mark Schreiner of the centre for Social Development at Washington University in Saint Louis, the PSC recently adopted with some modification by the World Bank for measuring poverty in Pakistan.
Three lower bands from the results of the poverty score card would be given priority for mobilization.

Community Resource Person (activists both from existing male and female COs) are identified and trained as front line volunteer for forming new community organizations. The formation of the Women community organization are given priority. In a village where 70% women have been organized, the VO of women are formed and provided Community Investment Fund for the destitute and vulnerable poor members of the COs.