Humanitarian Assistance for Over 1.5 Million Rural Communities Hit by Flood

Northern districts of Sindh province experiencing high level of flood in Indus River and the projected rainfalls. Regarding recent rainfall & flood the PMD and PDMA has already issued alerts/warning to make required arrangements before any unforeseen situation. Relief activities has been started by Govt. of Sindh. SRSO is maintaining close coordination with district Government in order to assist in implementation of contingency plans.

SRSO have started to chalk out a plan with respective Local Support Organizations(LSOs) to determine the needs of flood affected people in various union councils. SRSO has established a veterinary mobile clinic in order to treat and vaccinate animals evacuated from flood affected areas in district Ghotki. 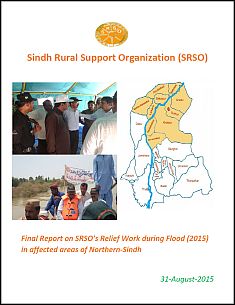 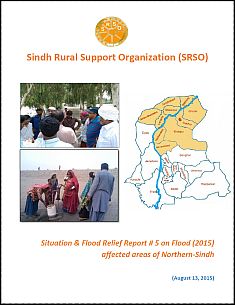 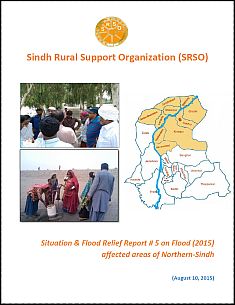 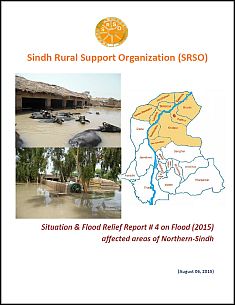 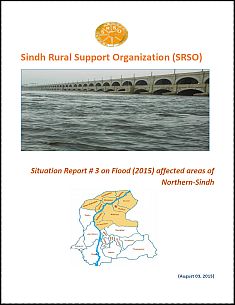 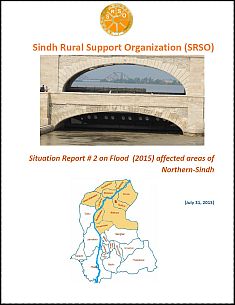 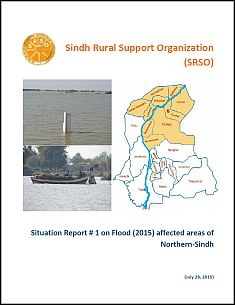 According to the SRSO’s preliminary rapid assessment report the flooding started right from Guddu affecting Districts situated at both banks of River Indus namely Kashmore-Kandhkot, Shikarpur, Ghotki, Sukkur, Khairpur, Larkana, Naushero Feroze and Jacobabad. The flood water has entered into the SINDH Province devastating completely more than 11000 villages in the Kacha and surrounding area displacing more than 213000 households from their villages along with 1,065,000 numbers of livestock.

It was August 7th 2010 breach of Torri caused heavy devastation in northern part of Sind. Flood inundated more than seven districts of sindh including Kashmore-Kandhkot & Shikarpur. As it was the unusual flood that brought people on the roads, and washed away their belongings, livestock and their Serial foods for their survival. People became shelterless as their shelters either destroyed or are inundated under heavy flood.

Sindh Rural Support Organization, in response to extensive floods in Sindh, launched flood relief operations on August 08, 2010 in its operational area. SRSO has also established an emergency cell which has been working since declaration of emergency along with Village Rehabilitation Program (VRP) unit which has started working independently with a dedicated team of engineers and town planners.

Initially, SRSO started its relief operation with the provision of cooked food to the displaced people; fodder & vaccination for livestock; and provision of safe drinking water through tankers. Subsequently these activities were complemented by other donor activities such as distribution of dry rations, installation of hand pumps, temporary latrines, temporary shelters and health and hygiene awareness sessions.

Hundreds of thousands of affected people are still in relief camps and require comprehensive relief support in the form of dry rations, safe water and health and hygiene facilities. People who have returned to their native places need support to earn their livelihood and construct homes. There are areas which are still submerged in stagnant water. These people still need food and transitional shelters, perhaps till the next crop cycle which may be at least eight to nine months from now or until they have alternative sources of livelihood.

The rehabilitation work has been started with the support of government and other donor agencies by the local and international implementing partners. However, considering the huge number of people that have been affected, the current relief efforts can only be viewed as short term support. Significant funding, planning and combined efforts are required to provide sustainable long-term rehabilitation. The basic opportunities to work for flood affected are provision of funds for construction of shelter and creation of livelihood along with training and technical support mainly through social mobilization, awareness and ownership. Most livelihood support is focused around Agriculture and livestock since majority of the affected population has always been associated with farming.

SRSO, with the support of different donors, has started rehabilitation work and support for livelihood and early recovery for flood affected people to generate tangible and meaningful resources to address future-midterm food security and shelter requirements.

Village Rehabilitation Project-VRP was the Reconstruction Plan of Two Room Houses to rebuild the 7000 houses for the flood victims, initiated by Government of Sindh. Simultaneously, some of the INGOs; WFP, USAID, UNICEF, DFID etc; have decided to contribute in different shapes like; Food for work, Sanitation for the completion of this big initiative. Each house comprises of two rooms with latrine & drinking water hand pump, drainage and brick-paved streets. The material cost of one house would be Rs 83,541 and the total cost of the house would be Rs.128, 000. The work on the VRP has been started on immediate basis after December 15th, 2010 and finished by June, 2012.

It is believed that the power of social mobilization and capacity-building can play a dynamic role in changing the landscape. Once the rural poor are organised, important changes can take place changing their socio-economic condition.

Relief and Rehabilitation Activities in Flood Effected Areas of SRSO (2010)