Community Conference on "EDUCATION" in Kashmore-Kandhkot 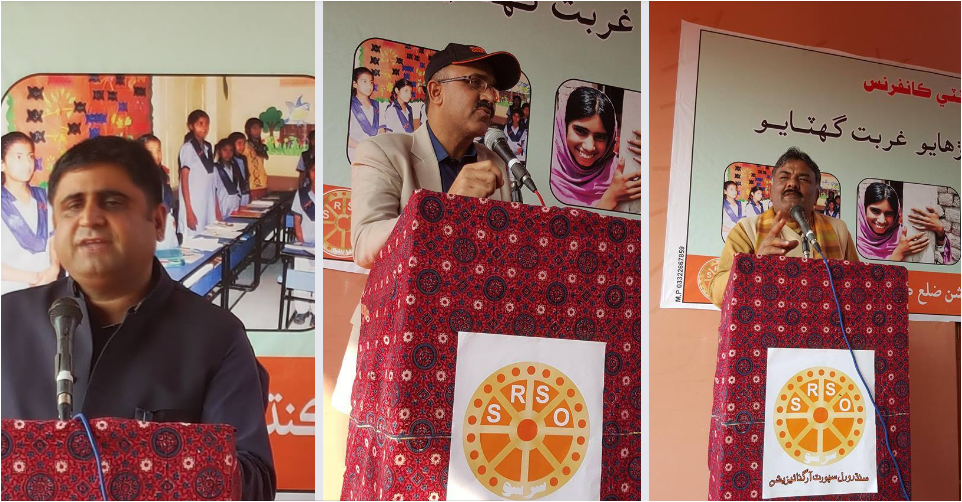 To use the power of education to change the lives of children that are underprivileged, SRSO Organized a Community Conference on the Theme of “EDUCATION“ on 30 November 2015 at Government Community Cluster Secondary School Bahadur Khan Khoso, in UC Gulwali, Taluka Tangwani and District Kashmore-Kandhkot.
More than 150 Women Leaders Participated in the conference. Officials from Education department, Deputy District Officer, Taluka Officer Tangwani ,Taluka Officer Kandhkot ,SPEs and Principal GHS Ghouspur, Representatives of INGOs/NGOs and Teachers , CEO SRSO and SRSO Officials participated, and took part in discussion on the importance of Education especially enhancement of Girls enrollment in schools.
Through this conference participants highlighted the importance of transforming social interactions between organized members in the community through education and to educate children of current & coming generations for building a safer & secure society for all of us. Education is the key to economic empowerment and Equal education boosts economic growth for women and girls.

Launching of SUCCESS Program in Sindh

The European Union (EU) delegation to Pakistan, the government of Sindh and the Rural Support Programmes Network (RSPN) launched the European Union funded six-year Sindh Union Council and Community Economic Strengthening Support (SUCCESS) programme in Karachi on 25 November 2015.
According to a statement, the objective of the SUCCESS programme is to reduce poverty through undertaking the Community Driven Development (CDD) based on the proven social mobilisation approach of the Rural Support Programmes (RSPs). The programme will cover eight districts, namely Tando Muhammad Khan, Sujawal, Matiari, Tando Allahyar, Larkana, Kambar Shahdadkot, Dadu and Jamshoro.
Besides speakers including EU Ambassador in Pakistan His Excellency Mr. Jean-François Cautain, Additional Deputy Secretary Sindh Mr. Ajaz Ali Khan, Chairman SRSO/RSPN Mr. Shoaib Sultan Khan, Chief Executive Officer RSPN Mr. Khaleel Ahmed Tetlay, Chief Executive Officer National Rural Support Programme (NRSP) Dr. Rashid Bajwa, CEO-SRSO Mr. MD Kalhoro and Dr. Amaury HOSTE, Head of Section, Rural Development and Economic Cooperation, EU Delegation to Pakistan, other EU officials, representatives of partner organisations for SUCCESS programme, government officials, representatives of LSOs and civil society representatives attended the ceremony.
Jean-François Cautain said the philosophy of the rural support programmes, with their 30 years long experience widely documented in its successes across Pakistan, convinced the EU to recognise the multiple opportunities offered by the three-tiered social mobilisation approach in different fields as promotion of a culture of participation, inclusivity and solidarity, direct provision of front-line services, planning and development, business creation, savings, conflict resolution, dialogue and interaction with local authorities.
The ambassador further said the SUCCESS programme was developed at the request of the government of Sindh to extend the geographic coverage of their Union Council Based Poverty Reduction Programme (UCBPRP) to eight rural districts of Sindh. This clearly shows the commitment of the Sindh government to this approach.
Mr. Shoaib Sultan said view that the Success programme would change the dynamics of the lives of poor in rural Sindh and would transform them into productive citizens. He congratulated the Sindh government and the EU for taking the decision which would have sustainable impacts. 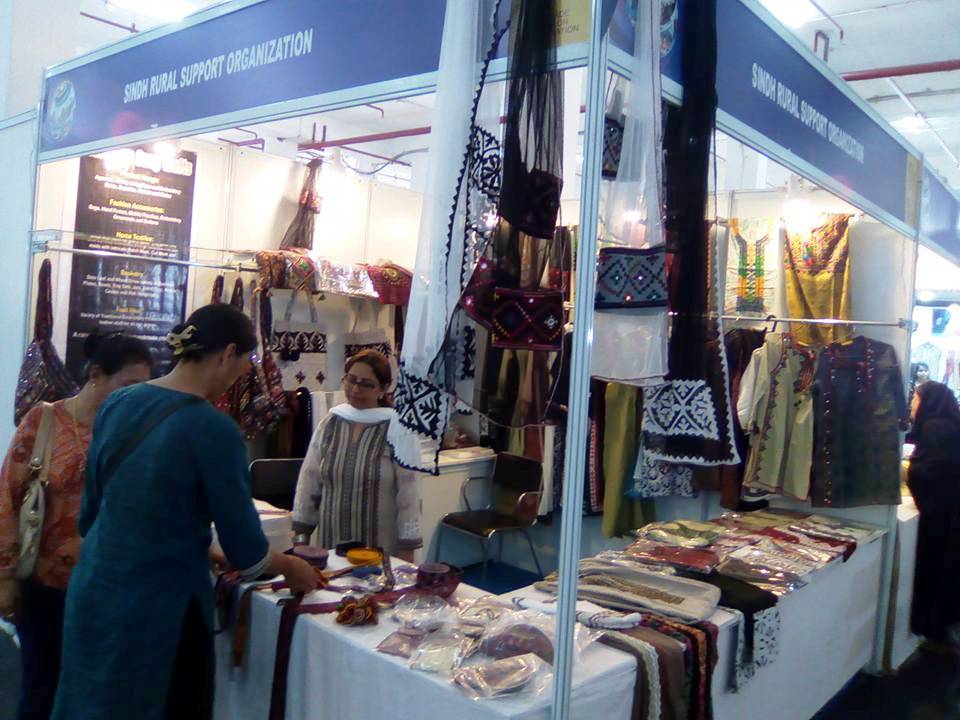 Crafts Enterprise Development Section of SRSO participated in 35th edition of Internation Trade Fair in India . It was organized by ITPO at Paragati maidan in New Delhi from 14 to 27 November 2015. Federation of Pakistan Chamber of Commerce and Industry (FPCCI) selected the interested and potential entrepreneurs as well as companies.

The 2nd conference on Community Driven Development (CDD) was organized at SRSO complex Sukkur on 02 October, 2015 with the financial support of European Union Delegation in Pakistan. This event highlighted the work of RSPs and engagement of community members in rural areas of Pakistan.
The objective of the conference was to facilitate a dialogue among different stakeholders including policy makers, donors, programme practitioners and researchers working on CDD programmes in Pakistan, identify successful approaches and challenges faced to mainstream and scale up CDD in Pakistan and beyond, increase the visibility of the RSPs work on CDD in Pakistan, explore lessons/knowledge and exchange with stakeholders, and proposals and recommendations on how RSPs can have a better impact through CDD .
Members of SRSO Board of Directors, EU Officials , Officials of government line departments, senior proffesional from Civil and development sector, officials of RSPs, Community Leaders, elected members of local bodies, civil society, representatives of electronic and print media, and other stakeholders were the part of this successful conference. The level of engagement and participation of these stakeholders were commendable. They appreciated RSP's work on CDD and proposed different ideas to have a better impact in future. 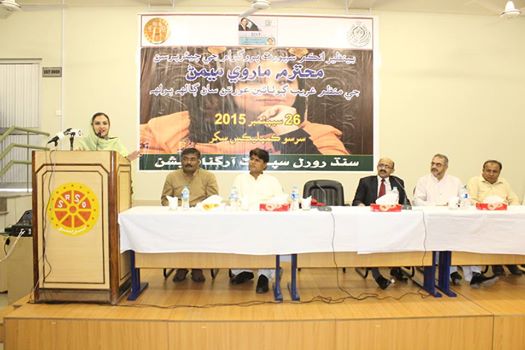 Ms. Marvi Memon Minister National Assembly(MNA) and Chairperson of Benazir Income Support Program (BISP) spent Eid ul Azha with Organized Rural women of Northern Sindh on 26 September, 2015. This event was organized by Sindh Rural Support Organization(SRSO).
Ms. Memon said that she was happy to be among the women belonging to Shikarpur, Jacobabad, Kashmore-Kandhkot and other villages of Sindh. Memon talked about the purpose of her visit to rural Sindh, which was to gain first-hand knowledge about the problems faced by people here, so that she can take steps to solve them.
Ms. Marvi Memon appreciated the work of the SRSO to eliminate poverty in northern Sindh and issued orders to the officials to solve the problems of the beneficiaries. Talking about women empowerment, SRSO chief executive officer Muhammad Dittal Kalhoro said that the Chairman of SRSO Mr. Shoaib Sultan Khan’s work is based on the belief that the poor can bring themselves out of poverty if they are organised and their capacity developed by harnessing their true potential. He also said that SRSO is providing interest free loans to marginalized women through the Community Investment Fund (CIF). Women collectively manage this fund by distributing loans for investment in income-generating activities, he added. “This has built the confidence and capabilities of the poor rural women, whose concerns are often brushed aside by male tribal elders,” he said.
The director BISP Mr. Zulfiqar Abro, representatives from various banks and hundreds of women from Sukkur , Shikarpur , Khairpur, Kashmore and Jacobabad were present at the occasion. 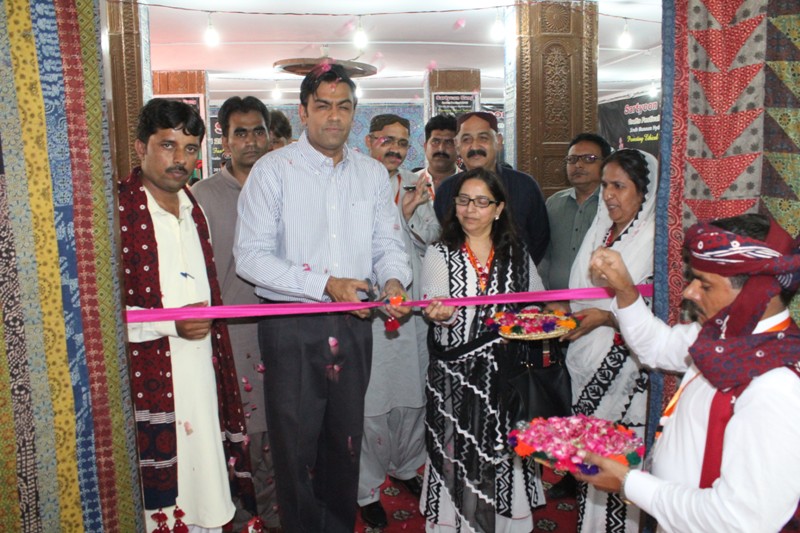 Sartyoon Sang organized crafts festival 2015 at Sindh Museum Hyderabad from 5 to 7 June 2015. Mr. Asif Hyder Shah Commissioner Hyderabad division inaugurated the festival.
Sartyoon Sang Crafts Festival attracts Hyderabadians. All ingredients of Sindhi culture were there. A wide mixture of Sindh's handicrafts made by rural women were exhibited, including home textiles, basketry, jewellery, dresses, dupattas and shawls, embellished with traditional embroidery and cutwork. The event is part of Sindh Rural Support Organization’s, (SRSO) efforts to provide market linkages to rural women and artisans.
Muhammad Dittal Kalhoro , chief executive officer SRSO told that the event's objective was to facilitate better incomes for women artisans of rural Sindh. "We have trained more than 10,000 women from some of the most under developed regions of Jacobabad, Kandhkot/Kashmore, Shikarpur, Ghotki, Kambar-Shahdadkot, Khairpur and Sukkur that to help these women gain maximum monetary benefit from their skills, they have incorporated urban trends into their work. “In order to set apart their work from what is available in the market, we have made a few innovations, ” said CEO MD Kalhoro. 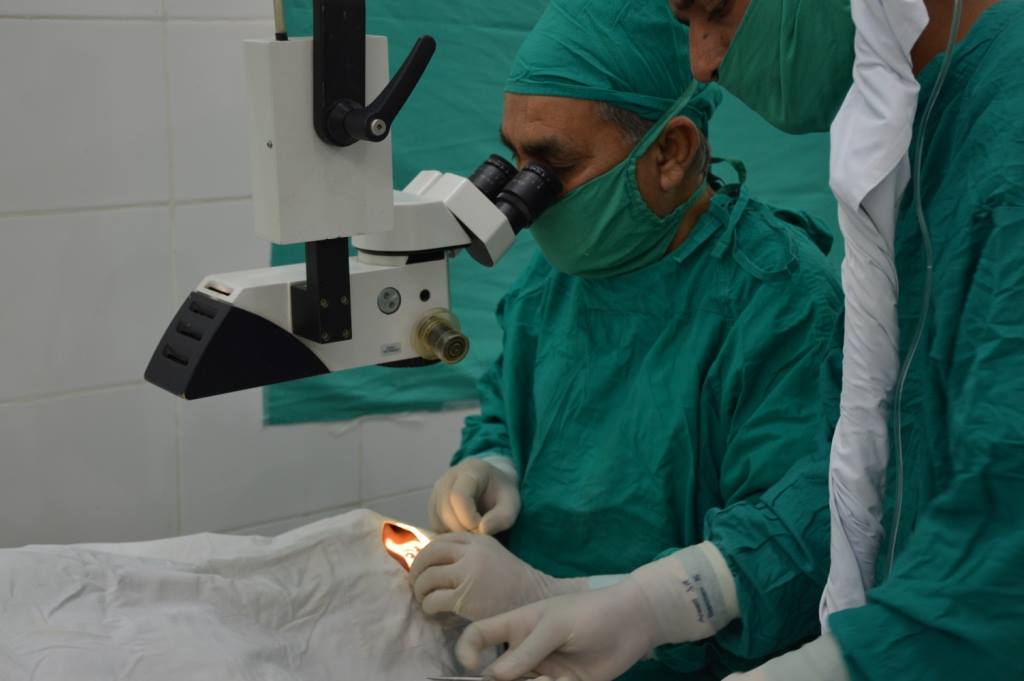 A free three-day eye camp was organised in Rural Health Center Sultan Kot, in Shikarpur district, by Sindh Rural Support Organisation in collaboration with HelpAge International and Prevention & Controls of Blindness Programme from 6 to 8 March 2015. 600 patients of Older People Associations (OPAs) were registered. 400 deserving eye patients was diagnosed, treated and provided with medication and spectacles. 220 patients were also operated for cataract surgery upon free of cost by qualified eye surgeon.

Mir Hazar Khan Bijarani, Sindh Minister for Works & Services inaugurated the 3-day event at Ocean mall Karachi. Talking to media, Minister Bijarani told reporters that the there are more than a dozen stalls, exhibiting a mixture of variety of traditional arts and crafts. The second Sartyoon Sang Craft festival was organized from 30 January to 01 February 2015 and is part of Sindh Rural Support Organization’s, (SRSO) efforts to provide market linkages to rural women and artisans. The Festival attracted large numbers of women residents of Clifton and nearby areas on first day. Muhammad Dittal Kalhoro , chief executive officer SRSO told that the event's objective was to facilitate better incomes for women artisans of rural Sindh. "We have trained more than 7,000 women from some of the most under developed regions of Jacobabad, Kandhkot/Kashmore, Shikarpur, Ghotki, Kambar/Shahdadkot, Khairpur and Sukkur that to help these women gain maximum monetary benefit from their skills, they have incorporated urban trends into their work. CEO Kalhoro said. “SRSO is trying to get their products into popular stores, such as Khaadi, so that these women have a steady source of income.”